Recently I had the chance to interview author Kristen Brand about her book Hero Status.


Hi Kristen, thank you so much for agreeing to this interview. I first came across your latest book Villainous and was intrigued by the cover and premise. Once I saw it was a sequel I jumped over to Hero Status to read it first. I truly enjoyed reading it. You've written a book with a solid balance of humor and action and tied a who-done-it bow around the whole thing. The story is based in Florida, specifically Miami and takes place during a Superhero convention. One of my favorite things about the story is the diverse backgrounds and ethnicity of the characters. Dave, aka the White Knight, is at least half Cuban. What inspired this cast of characters and do you feel diversity in fiction is important? Why?

Kristen Brand: Hi Amberly. Thank you so much for inviting me to do an interview!

I’m a fan of the advice “write the book you want to read,” so that’s what Hero Status was for me. I’d say the characters were inspired by the state of superhero comics at the time I wrote the novel. Spider-Man had sold his marriage to the devil (No, really.), and the DC universe had rebooted and erased Superman and Lois Lane’s marriage along with many others. Everybody was young and single again, and I wanted to read about a superhero who was allowed to grow old and be in a committed, drama-free relationship. Plus, I’ve always been a fan of the Dating Catwoman trope, so that’s how I ended up with Dave, a retired superhero happily married to his former nemesis.

Dave interacts with a lot of characters throughout the novel, and I think it would be boring and unrealistic if they weren’t diverse. The world is a diverse place, and fiction should reflect that. Everyone deserves to be able to see themselves in the characters they read about, and I’ll take this chance to point to the awesome people at http://weneeddiversebooks.org , who do an excellent job of showing why this is so important.

Me: Spider-Man's One More Day! My husband has ranted about that story line. I can see the appeal of a drama-free relationship, as long as external factors keep them in the action. One of the scariest scenes in your book involves two suspects in a sex club using mind control. To be that vulnerable and manipulated, and worse, to forget later what had been done. I think I would feel like my body had been broken into and ransacked. What is your worse fear and how do you use that in your story or writing?

Kristen: I don’t know if I should put my worst fear out on the internet. I feel like that could backfire on me someday, haha. I’m afraid of bugs, so if one of my characters ever fights a giant bug monster, that would be why. In all seriousness, though, I think my worst fear isn’t something bad happening to me, but something bad happening to someone I care about, and I definitely use that in my writing. Dave isn’t afraid of any of the villains he fights in the novel. He’s afraid he won’t be able to save his wife, and that his daughter will lose her mother. Keeping his family safe is his driving motivation throughout the story, which I think is relatable to a lot of people. (And he hasn’t had to fight any giant bugs. Yet.)

Me: Good point about being vulnerable on the internet, your nemesis would find it. Yes, great! Fictional characters, whether they have superpowers or are extraordinary in some other way, are best when they have relatable issues. I can't lift a car but I will always make sure my family is safe. Next question. It's obvious that your a fan of comics, why tell your story in a novel instead of a graphic novel or comic?

Kristen: That’s a really good question. I don’t think I ever considered going the comic book route with this story. Both comics and novels have their own advantages when it comes to storytelling. Comics definitely win when it comes to visuals, but I think prose can more easily put the reader into the main character’s head. For Hero Status, I wanted the reader to connect with Dave and see his thought process. Plus, I like being able to describe not just visuals, but what he’s hearing, feeling, smelling, etc. Details like the way Dave’s old superhero costume made him sweat in the summer or the citrus smell of his wife’s shampoo help ground the story in reality a little bit—which is important when your story is about people with fantastic superpowers.

Me: Good point. Everyday elements to offset the supernatural ones.

At different time Dave seeks out safe-houses his wife has set up around Miami. They have clothes and ID and money and weapons. He is appropriately grateful for his wife's paranoia because it makes hiding and regrouping easier. If you had a secret lair, where would it be and what would you have in it?

Kristen: I would have to go with a private island for my secret lair. It would be somewhere tropical and have a submarine for quick escapes. Having money and weapons there would be smart, but I’d settle for a well-stocked kitchen and a room to write in—something with a nice big desk and an ocean view. And since this is sounding less like a secret lair and more like a dream vacation home, I’ll throw in some trained guard sharks to keep out my nemesis.

Me: With laser vision! Okay, this has been a lot of fun but lets wrap things up with my last question. Tell us about the sequel to Hero Status and what you are working on now. *considers rewording to make it an actual question instead of a command* *decides to leave it*

Kristen: Yeah, I don’t think sharks with laser vision are too much to ask for.

For Villainous, the sequel to Hero Status, I’ve switched to Val as the narrator. Basically, Dave’s in a bit of trouble after all the laws he broke to rescue her in Hero Status, so she makes a deal with the government to keep them from pressing charges against him. In exchange, she has to bring them enough evidence to arrest a certain supervillain she has a history with. It was fun writing from Val’s point of view, because while violence is a last resort for Dave, she’s much more willing to maim, murder, or mind-control people who get in her way.

Right now, I’m working on a prequel serial from Dave and Val’s pre-retirement days which will hopefully go up on my website early next year. Then it’s back to Dave’s point of view for book three in the series, Almost Invincible.

Me: I hope both Villainous and Almost Invincible have more of Dave and Val's daughter, lots of potential for emotional and humor moments there. Well, thank you so much for doing this interview with me.

Kristen: Thank you so much for having me! 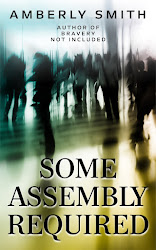